STARTUPS: Leader of CONNECT Has Goal of Ten $1 Billion Companies 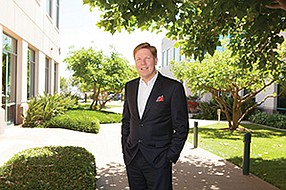 One of Greg McKee’s top goals as president and CEO of CONNECT is to attract as much capital as possible. To that end, he’s launched Capital Match, a program designed to introduce investors to vetted San Diego companies in life science and technology. Photo by Melissa Jacobs.

San Diego — Never judge a man by his suit, they say, but Greg McKee’s is quite telling. His charcoal jacket is flawlessly fitted and pressed: a sleek nod to his life on Wall Street. His pocket square, however, is a risky spot of flair; a colorful homage to the startup world in which he now works.

The interview begins and McKee, 53, starts out polished and on message. We look at presentation slides and annual reports. We talk goals and figures. As the hours tick by, however, the varnish starts to fade. His language gets colorful (and candid) when he gets passionate, and he flashes wry humor when topics get tough.

McKee is a novel amalgam of corporate finesse and startup spunk, it seems, the perfect match for his role as president and CEO of CONNECT.

Before tech was cool (and before startups were sexy), San Diego had CONNECT — the city’s oldest startup accelerator. The group was formed in 1985 to help tech-minded entrepreneurs create companies, and today it is considered a mainstay of San Diego’s innovation cluster. Since its inception, the group has helped 3,000 companies get their start, and its programs have been successfully modeled in 12 regions around the world.

Although the organization is a fixture among San Diego innovators, CONNECT is not without its critics.

In a memorable 2012 blog post, startup community leader Brant Cooper wrote a scathing assessment of a few business organizations in San Diego. The post became known as “Brant’s rant,” and CONNECT was a primary target for takedown.

In Cooper’s view, the organization’s leadership (before McKee’s day) was chronically out of touch with the needs of new age startups. As a result, CONNECT and other similar groups were failing the tech entrepreneurs they were created to serve.

These criticisms did not go ignored by startups in San Diego, and McKee has quickly responded to the call.

“When I came in I saw that a lot of entrepreneurs weren’t coming here,” McKee said.“They were going to other organizations for support. I wanted to bring them back to CONNECT.”

McKee came to CONNECT in 2014, about two years after Brant’s rant. A former investment banker and life science executive, McKee was (at surface level) an odd choice for the role.

Although CONNECT serves innovators in all sectors (including life science startups), technology firms are a large subset of the organization’s community. Some expressed concerns that McKee, a biotech guy, would feel lost serving the software sector. But McKee isn’t one to be cowed by the unfamiliar. It’s fair to say he thrives on it.

That characteristic goes way back, McKee said, starting somewhere around his college days.

After graduating college with an economics degree, McKee packed his bags and moved to Tokyo. He was 22 years old and didn’t speak a word of Japanese.

“When I was graduating, Japan was taking over the world and I wanted to find out why,” McKee said. “I wanted to know why their economy was growing so strongly compared to ours at the time.”

He spent several years working abroad, living in tiny Tokyo apartments where he could reach his fridge from his bed. He eventually earned the finer things in life as an investment banker, but he took a massive pay cut to work under a member of the Japanese parliament. He was one of the first Americans to do so.

At this point in the story, McKee beams as he hands me a framed photo of the former Foreign Minister of Japan Taro Nakayama. A young McKee, standing a lanky 6’2”, poses next to him, smiling sheepishly.

“I was his aide,” McKee said. “He was essentially number two in the country, and it’s a very hierarchical place.”

After five years in Tokyo, McKee became fluent in Japanese. Among many things, McKee was Nakayama’s translator, and the politician took him everywhere. McKee met world leaders and influential business tycoons, and followed Nakayama on the campaign trail to multiple wins.

His time in Asia became extremely valuable to his career trajectory. After grad school, McKee decided to abandon investment banking for greener pastures.

“I felt like the next few decades would be all about life sciences, and I wanted to be part of an industry that would be game-changing,” McKee said.

But McKee didn’t have any education in science, and it’s tough to get into pharma without a Ph.D. So he traded his experience in Asia to get into Genzyme Corp., which was (at one point) the third-largest biotechnology company in the world.

He became Genzyme’s director of Asia, launching the company’s lead product all over the continent. He spent nearly a decade in Tokyo and Singapore, and the company he helped grow was eventually sold to Sanofi for $20 billion in 2011.

“I had left many years before that,” McKee said. Large pharmaceutical companies were at his heels, wanting him to be their point man in Asia, but Big Pharma was his past. Biotech was the future.

McKee wanted more influence on a company’s early-stage development, he decided. At a small biotech, he had a better chance of edging into leadership.

About 13 years ago, he came to San Diego to join Nventa Biopharmaceuticals as their vice president of business development. He then became its chief financial officer, and then its chief executive. He learned about early-stage science, licensing transactions, clinical studies, and patents. He eventually sold the firm to AkelaPharma Inc.

When CONNECT recruited McKee, he was a rogue investment banker gone biotech executive. A man driven by curiosity, legacy, and impact. Tech founders were concerned he might be unfamiliar with the world of software, but at that criticism, he laughs.

He says living in a foreign culture gets you attuned to learning.

“That’s a theme of mine,” he said. “I don’t ever want to stop learning, and people don’t always let you do that. I think that’s really unfortunate. They always want to put you in the exact same job you just did.”

The breadth of that experience bodes well for McKee and the organization he now leads. In two years, McKee has revitalized the inner workings of CONNECT, breathing life into a 30-year-old organization ripe for rejuvenation.

“CONNECT needs to be relevant, but CONNECT had to change,” McKee said. “It needed to change because it had gotten stale.”

He cut a slew of old programs, and energized a handful of core projects. He has a new team, a new space, a new focus, and it seems to be paying off.

In 2015, CONNECT mentored 52 startups in its Springboard program and expects to mentor 80 this year. The startups appear to be generating more revenue, too, with a collective $246 million in revenue during 2014 compared with only $75 million in 2012 (before McKee was in charge).

To do that, McKee said he’s focusing almost exclusively on helping entrepreneurs create valuable companies and shifting away from hosting events.

“I think the event space is too crowded,” McKee said. “San Diego’s dance card is full. We used to do a bunch of back-office event planning for Tech Coast Angels, MIT Enterprise Forum, and others, but we don’t do that anymore. Events don’t drive value.”

Aside from a few key events, like CONNECT’s annual Most Innovative Product awards, McKee has cleared CONNECT’s calendar. Instead, he’s focusing on building up quality mentors and finding new cash for startups.

“It’s pathetic how little money is here; there is no money in San Diego for startups,” McKee said.

So McKee launched Capital Match, a program designed to introduce investors to vetted companies in life science and technology.

“We spent the last 20 years building our Springboard program, and we’re going to spend the next 20 building Capital Match,” McKee said. “I think it will be a game changer when people outside of San Diego realize what we have here.”

But if the talent was here — and the startups were valuable — wouldn’t the money come?

“The market doesn’t work on its own,” McKee said. “Market forces are individuals working their asses off to bring that money here.”

McKee said he believes San Diego’s startup community has all the necessary ingredients to thrive — everything except capital.

“The most staggering discovery I’ve made is how diverse San Diego’s startups are,” McKee said. “We were known as a military town, a tourism destination, and a life science community, but we’re so much more than that. We’re software, and cyber, and agtech. There’s cross-pollination between sectors. The fact that there is no money here is such a shame and such an opportunity. This is the last frontier for venture capital. It has to be.”

“If you try to manage a company on vanity metrics, you’ll fail, and the same is true of San Diego’s startup community,” said Cooper, author of the New York Times Bestseller “The Lean Startup.” “We should celebrate our wins, but sometimes we have to roll up our sleeves and do things that make us better.”

Cooper clarified he has no firsthand knowledge of how McKee has changed CONNECT as he hasn’t spoken with McKee directly.

“From what I hear, however, there are a lot of changes afoot,” he said. “But again, I’ve been hearing that for five years. To me, the proof is in the pudding.”