or over 13% of the total regional GDP

In 2019, San Diego’s innovation economy companies directly generated more than $63 Billion in sales, employed more than 164,000 workers, and provided over $21 Billion in payrolls.

The direct economic contribution to San Diego’s economy is over $33 Billion, accounting for more than 13 percent of the total regional economy or gross domestic product (GDP). Including indirect and induced impacts, the San Diego innovation economy results in over $61 Billion impact, 24 percent, of San Diego’s estimated total GDP.

Including indirect and induced jobs, the multiplier effect on jobs is 2.66 — this means for every technology job, another 2.66 jobs are dependent or created. 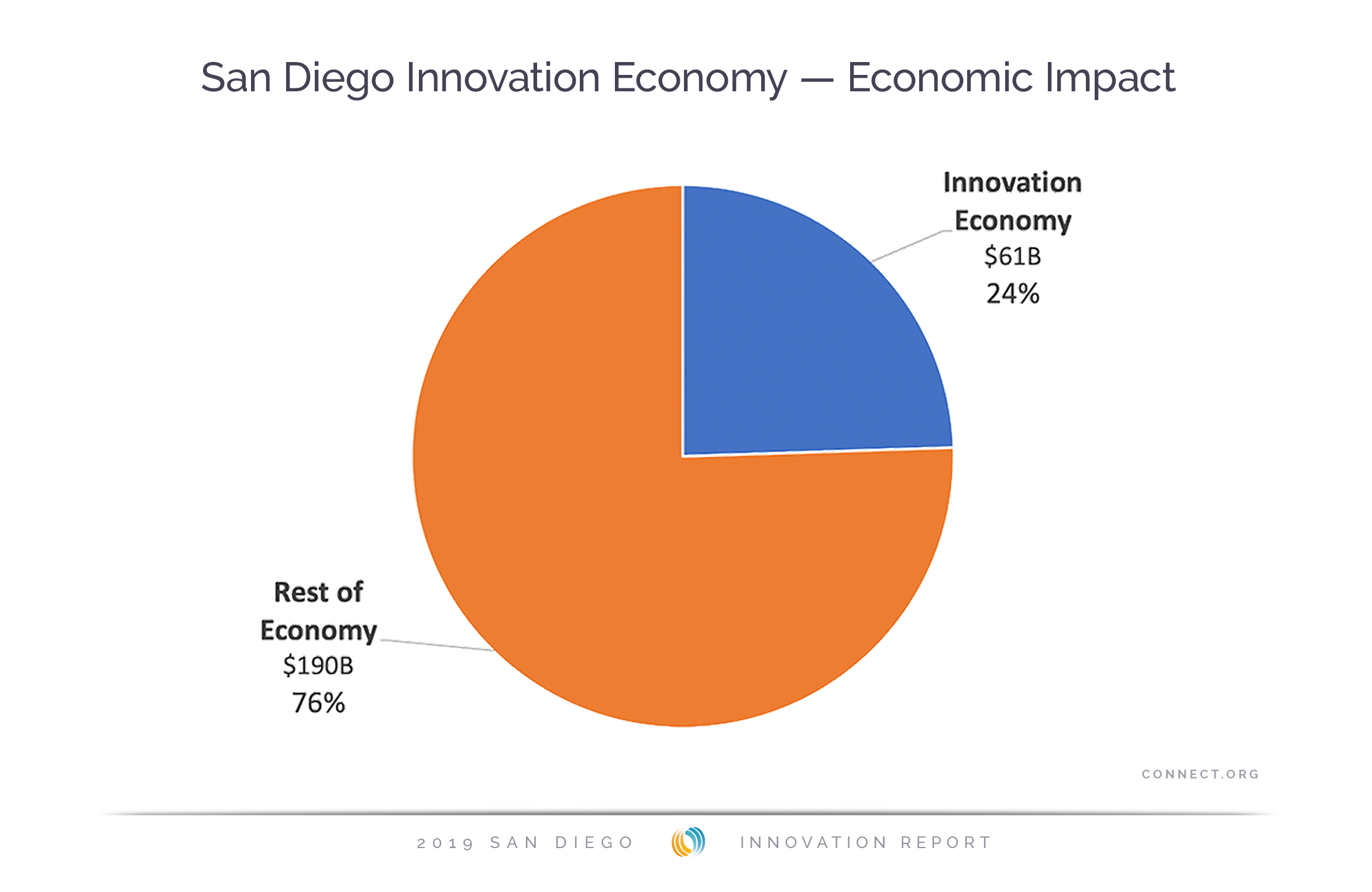 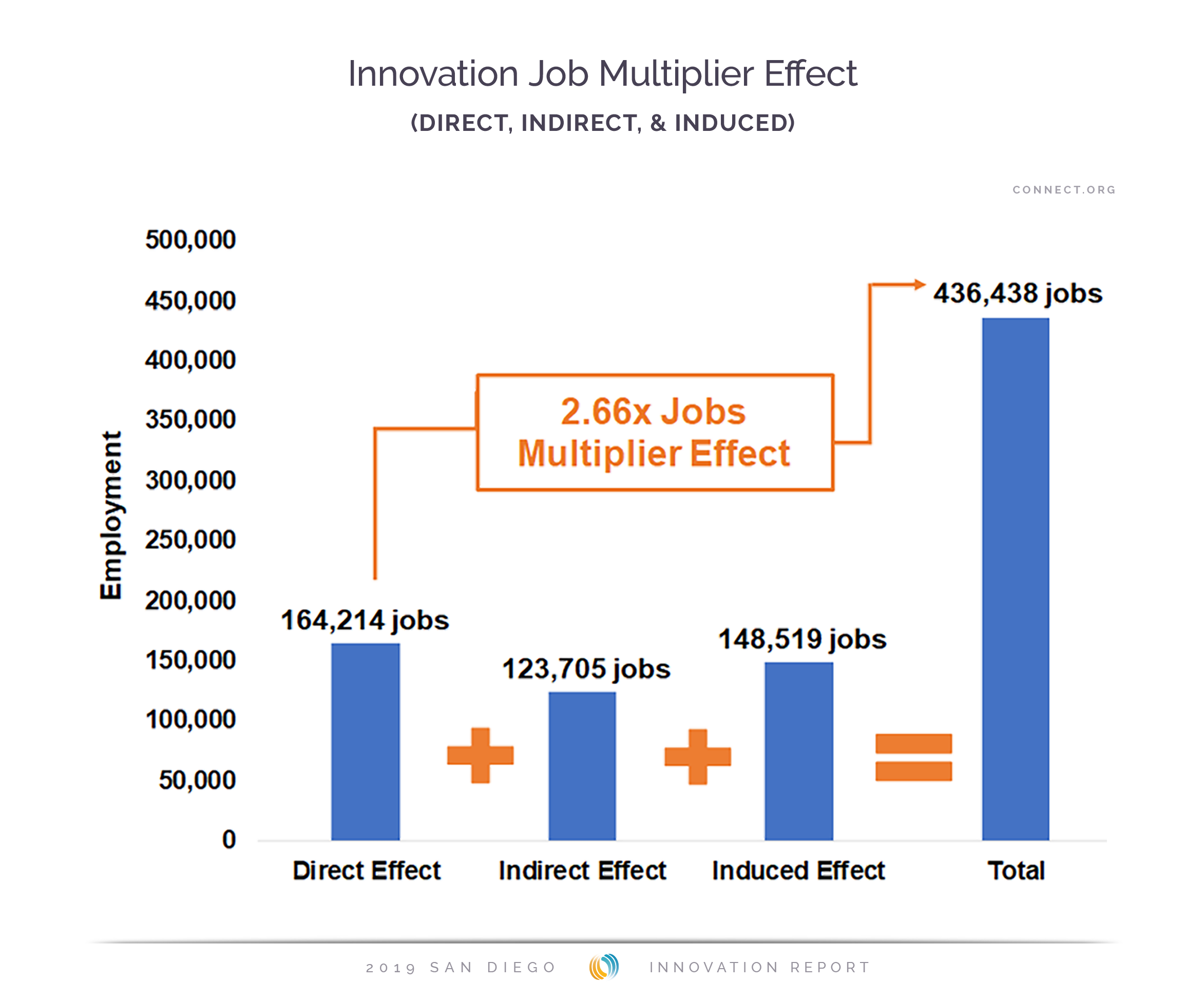 Continuing a trend over the last few years, new innovative startup creation dropped again in 2019, reaching the lowest it’s been since Connect began tracking this data in 2005. In 2019, 239 new innovation startup companies were created in San Diego. 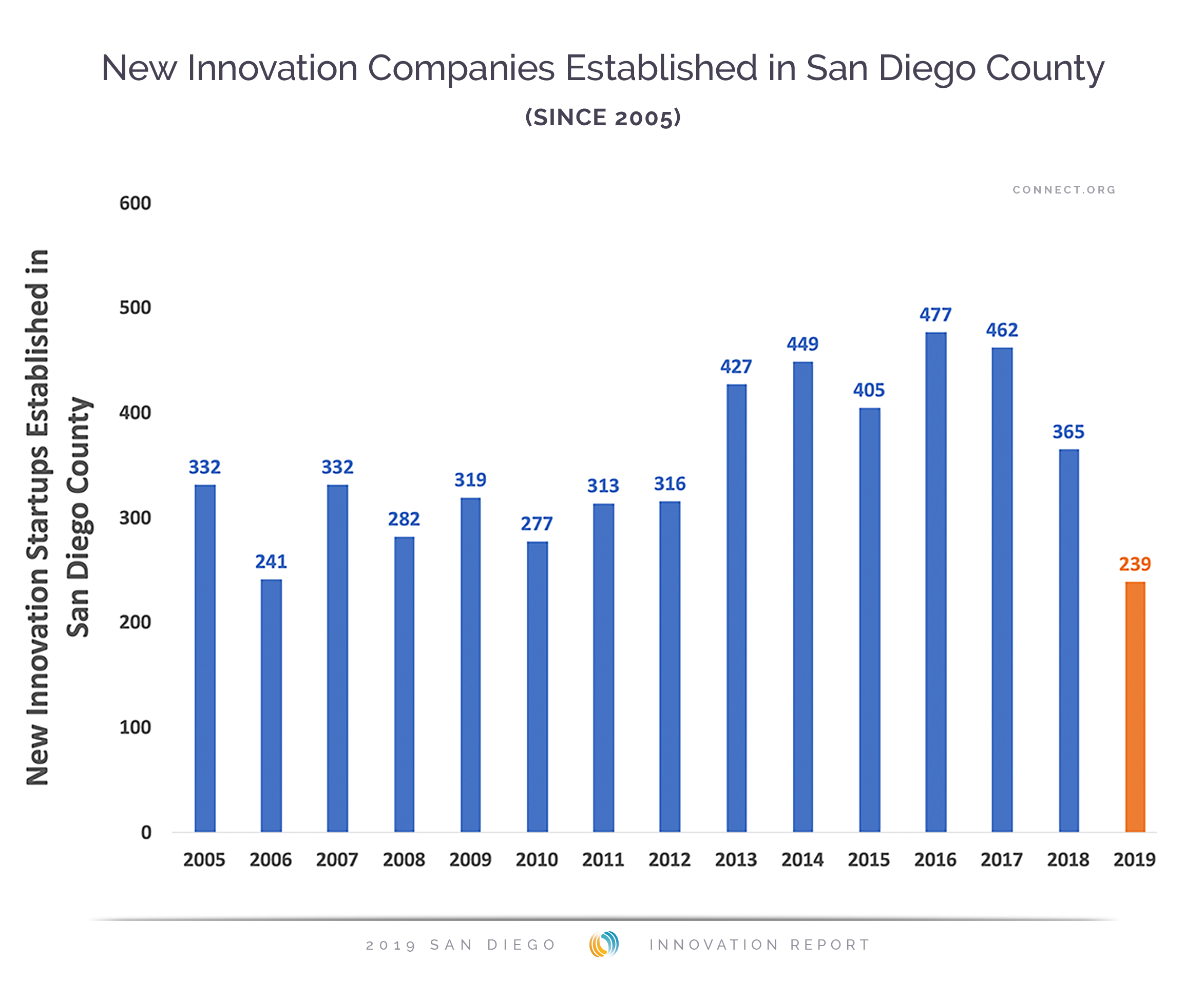 At least 5,236 new tech and life sciences companies have been created in San Diego during the period of 2005-2019.

San Diego county continued to rank first in California for the number of life sciences startups in the calendar year, continuing a five year trend. 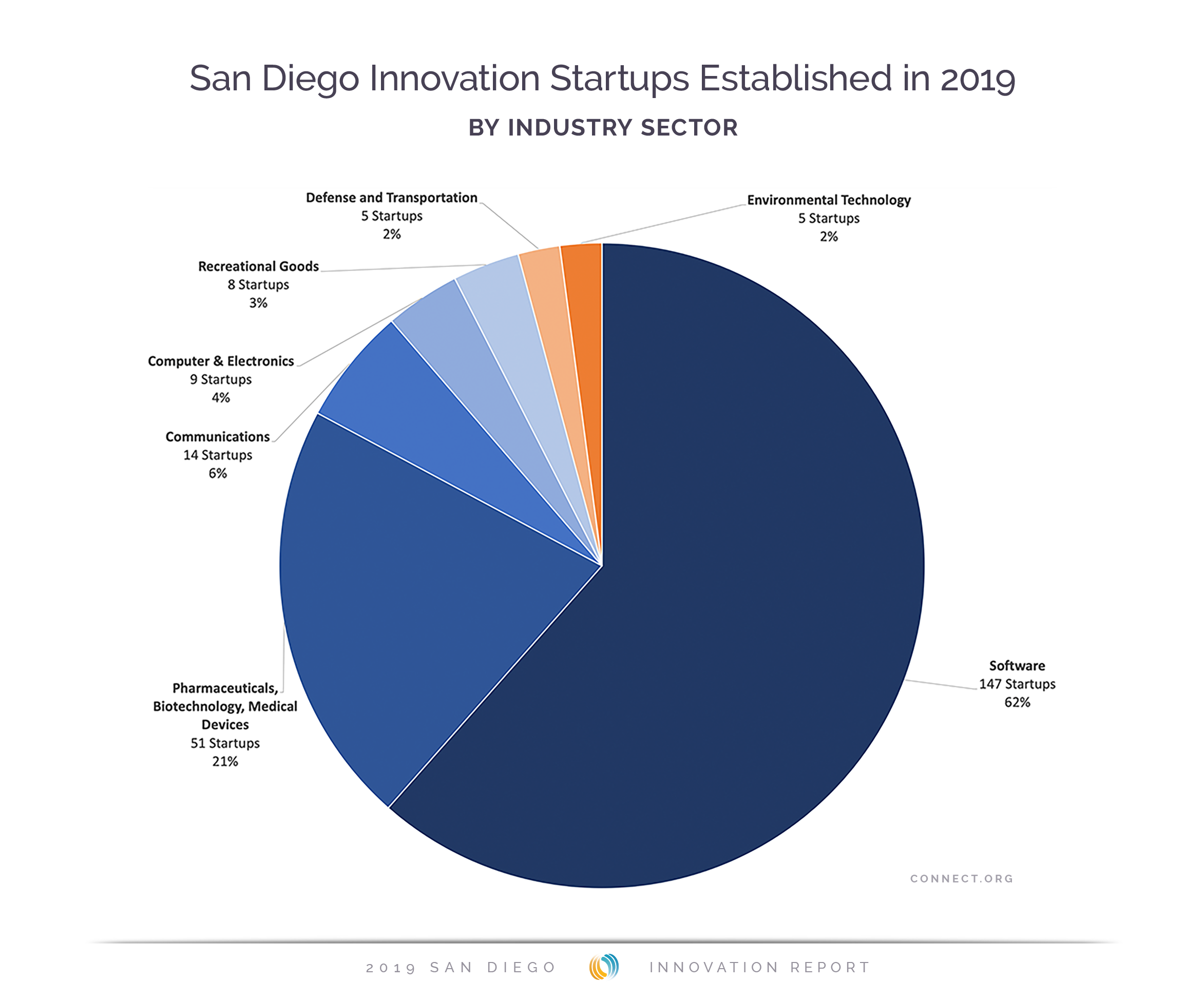 Software startups (in orange) continued to be widely spread throughout San Diego county in 2019. Startups in the Pharmaceuticals, Biotechnology, and Medical Devices industries are tightly clustered in Torrey Pines/UTC/Sorrento Valley, but also show a spread across the entire county. 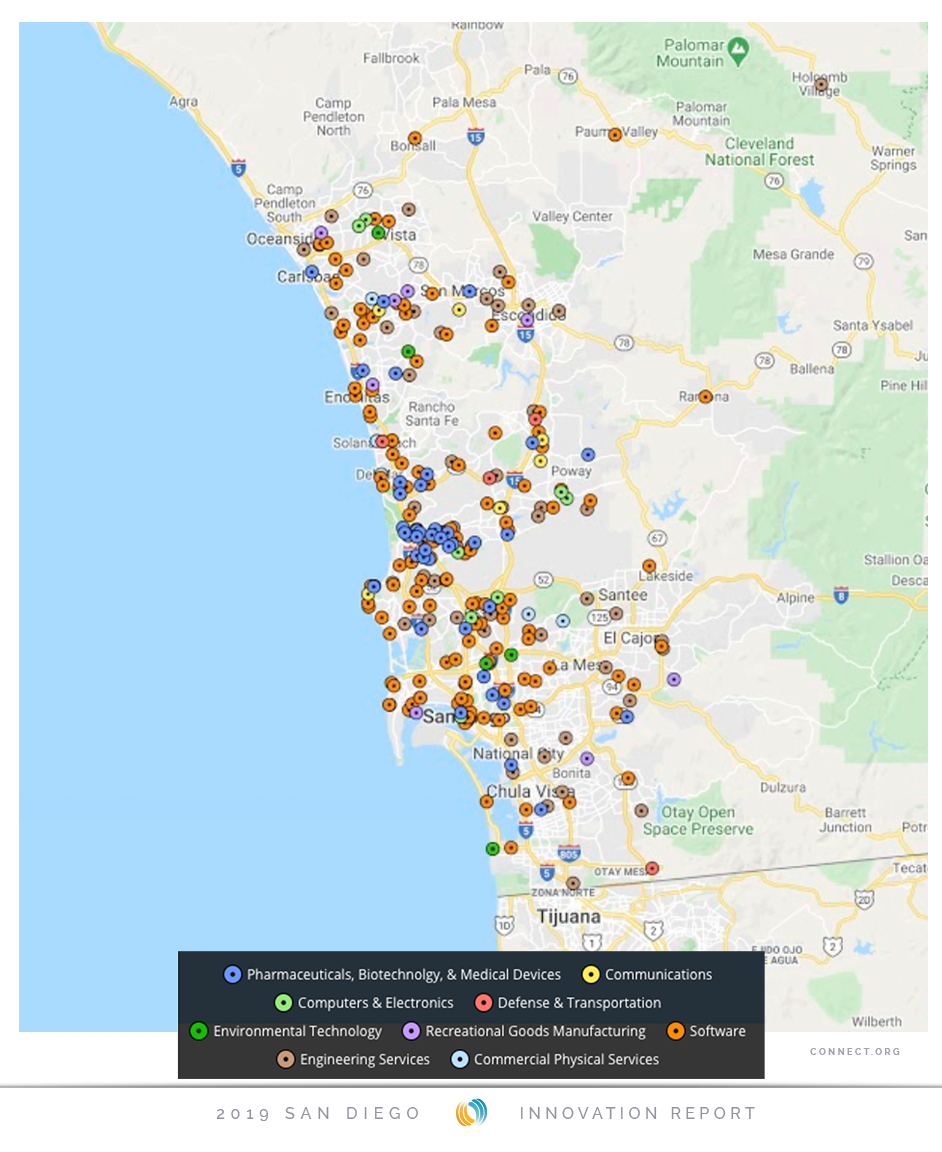 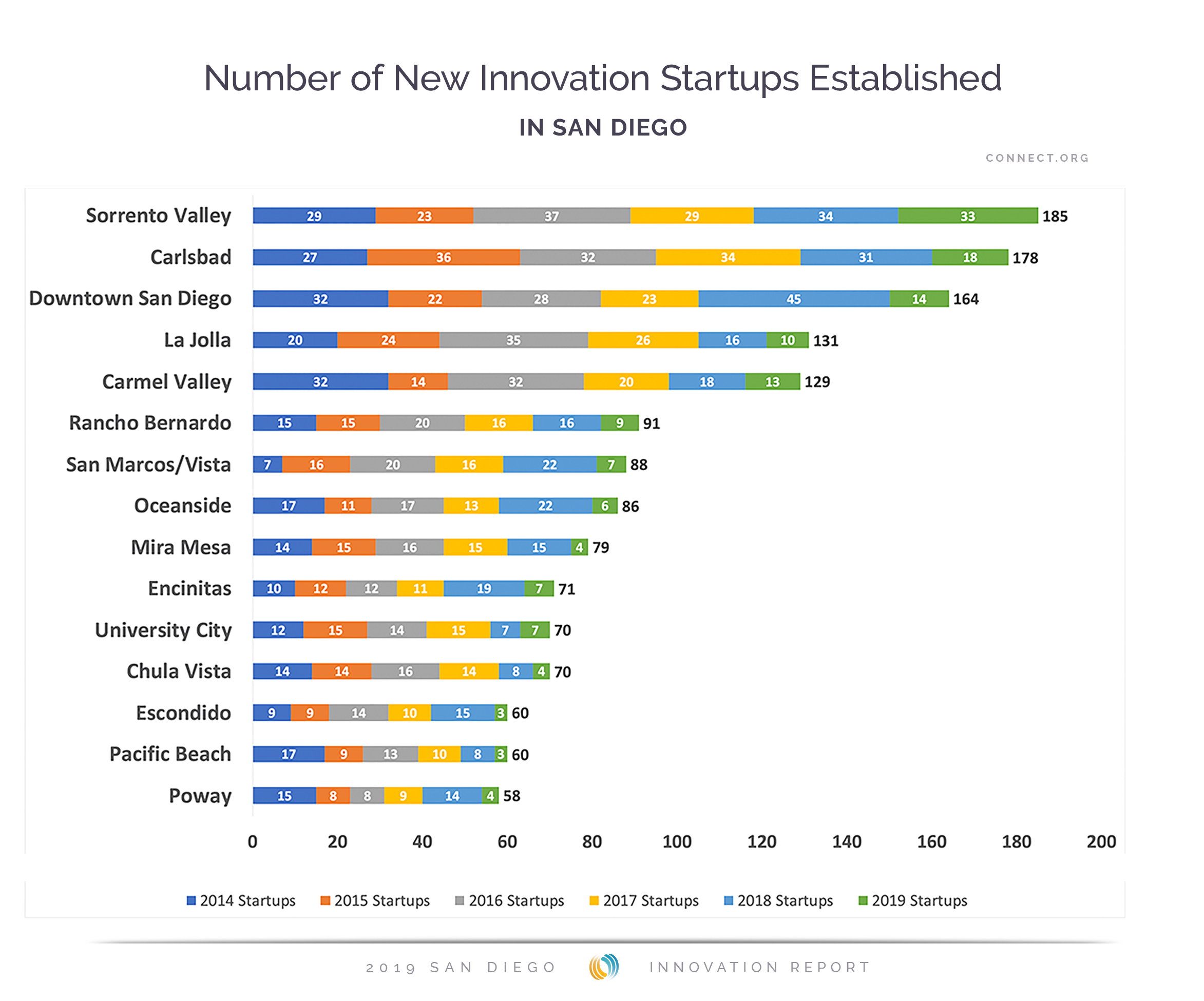 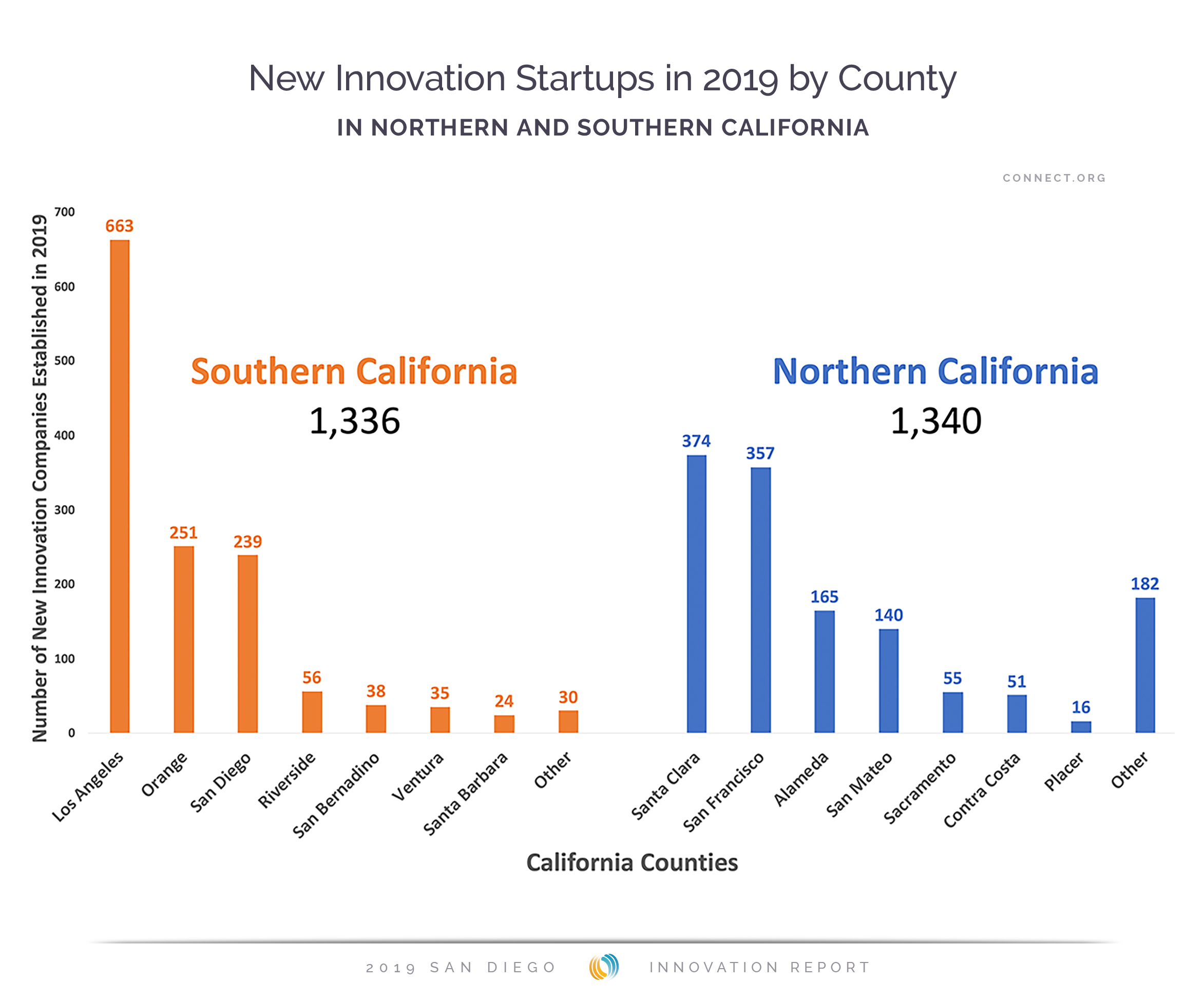 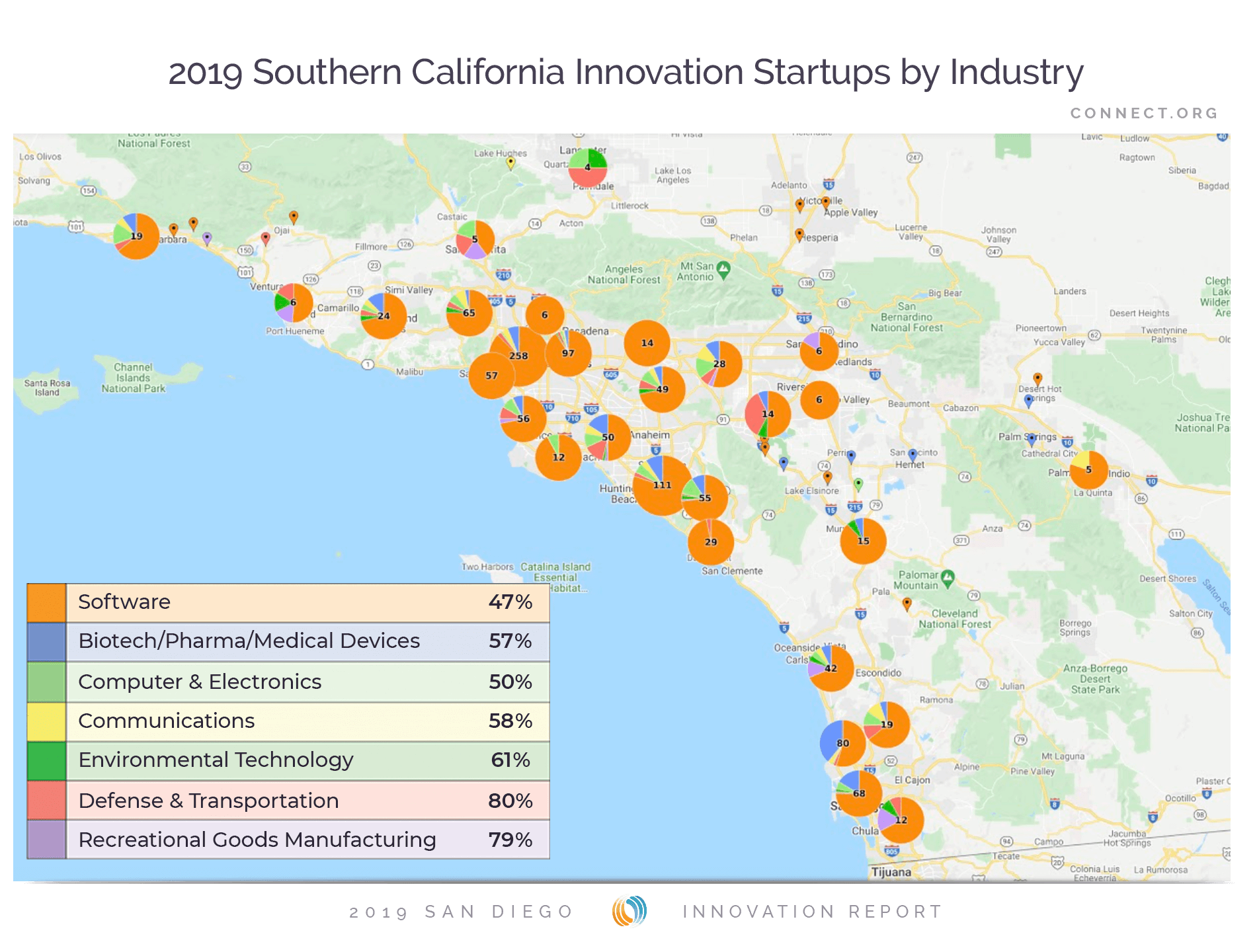 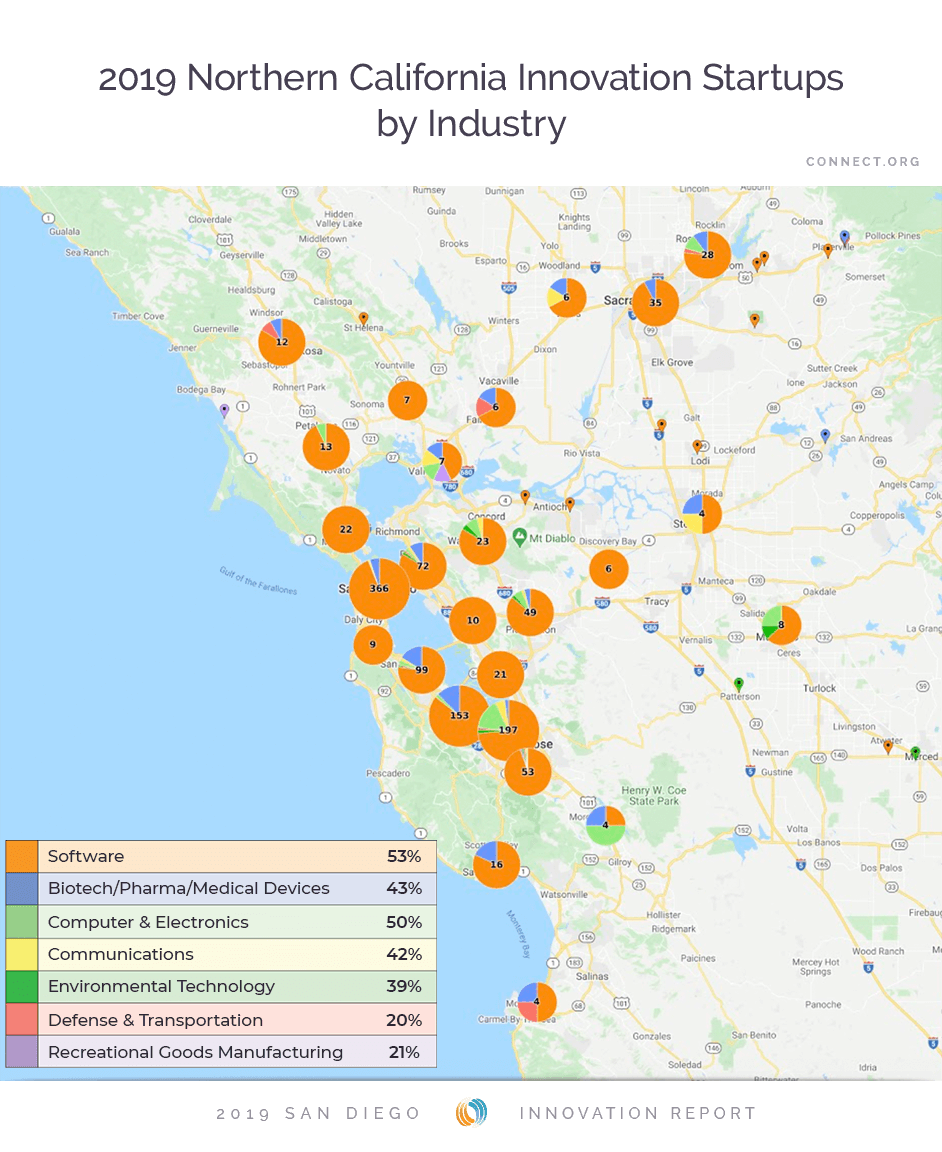 In 2019, San Diego’s innovation economy included approximately 7,242 companies and provided over 164,000 jobs. San Diego’s innovation economy is composed of knowledge-based sectors on the leading-edge of research, innovation, and the development of technologies. These sectors are defined by businesses involved in the development and production of technical equipment, communications, and/or advanced technology services. The specific technology sectors encompass: 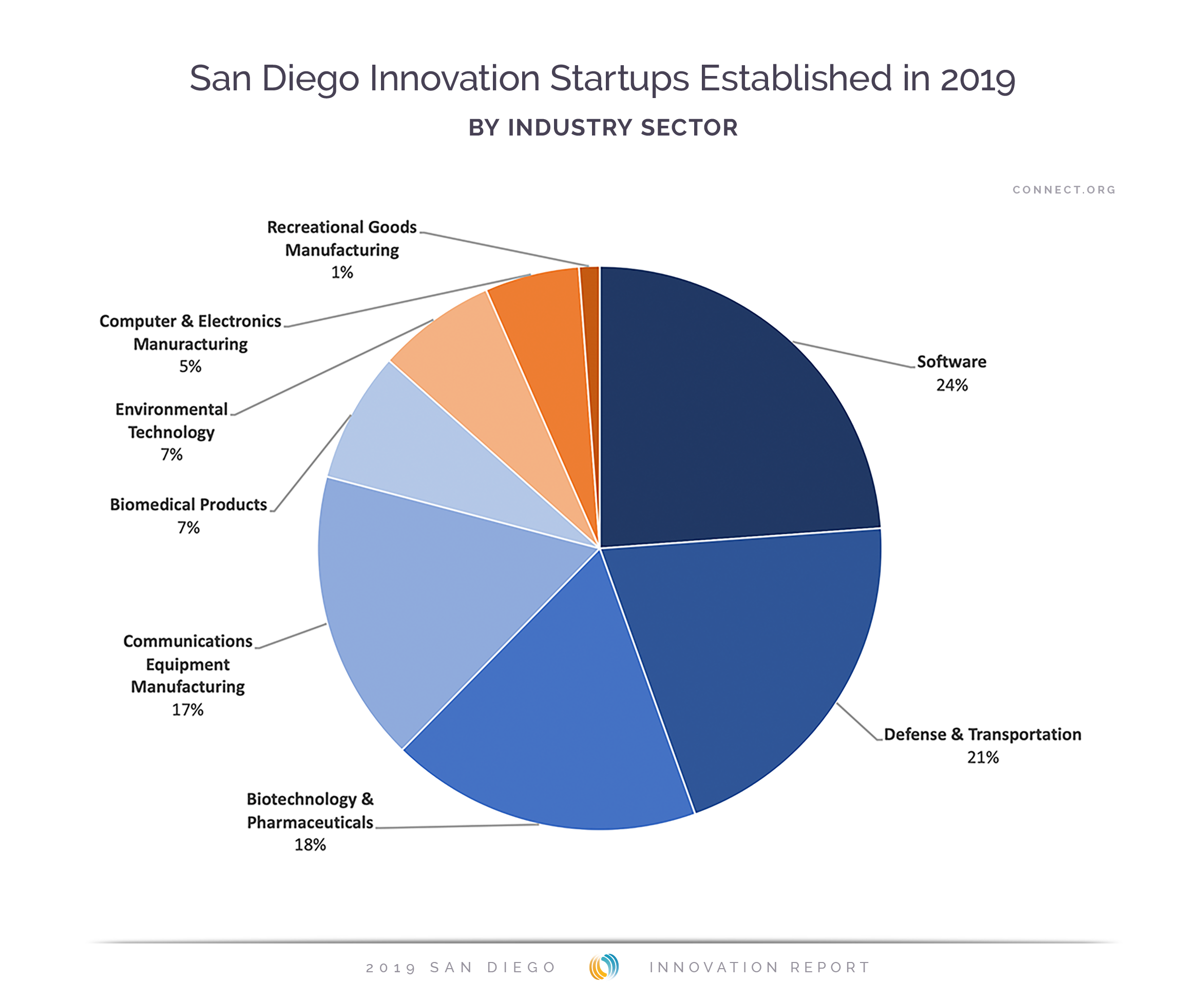 The average innovation sector job paid 1.98x more than the average job in San Diego in 2019. 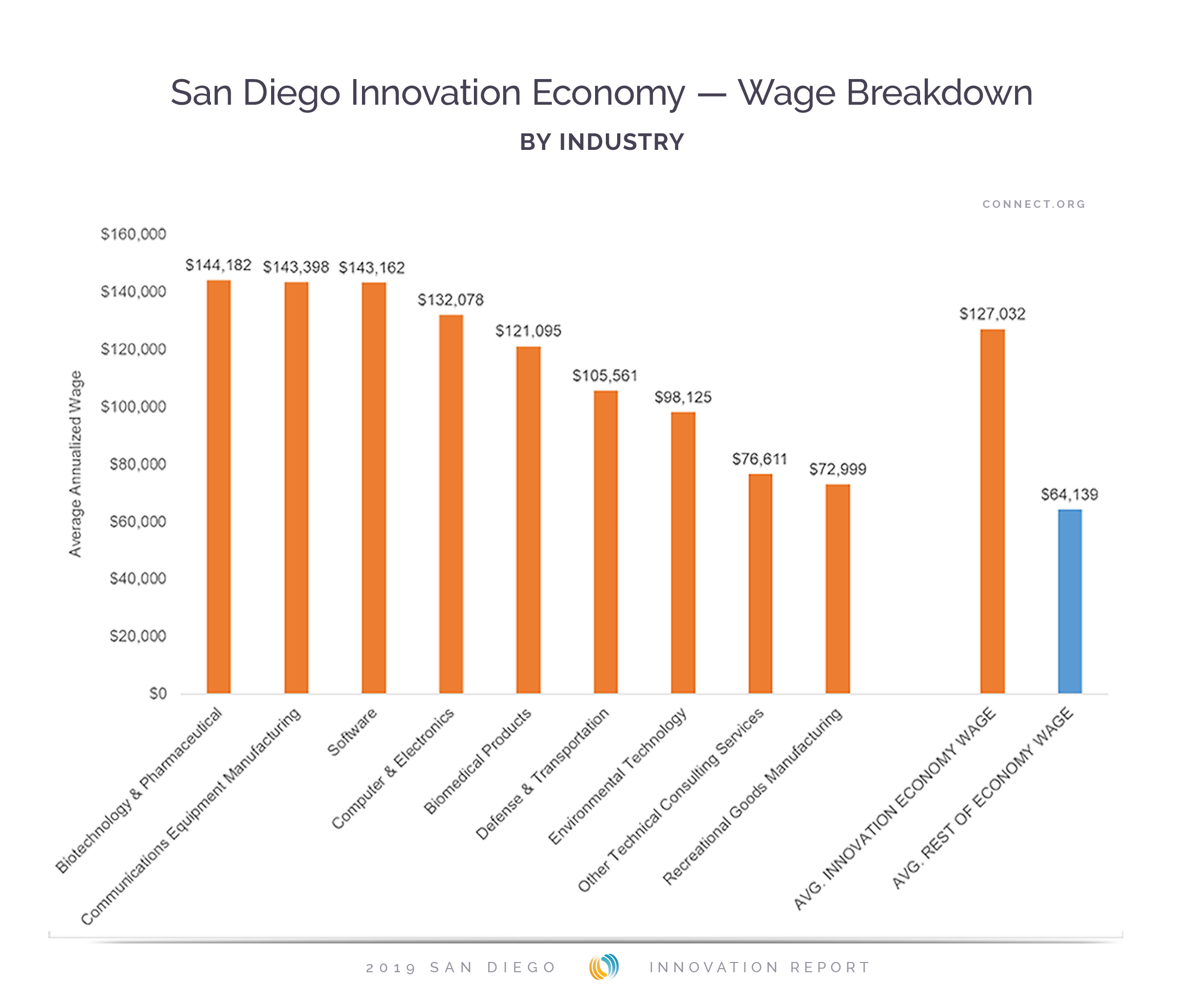 continuing the trend of growth to historic highs since the beginning of the decade.

The number of innovation economy jobs in 2019 jumped significantly from 2018 and continues a decade of growth to another historic high in 2019. 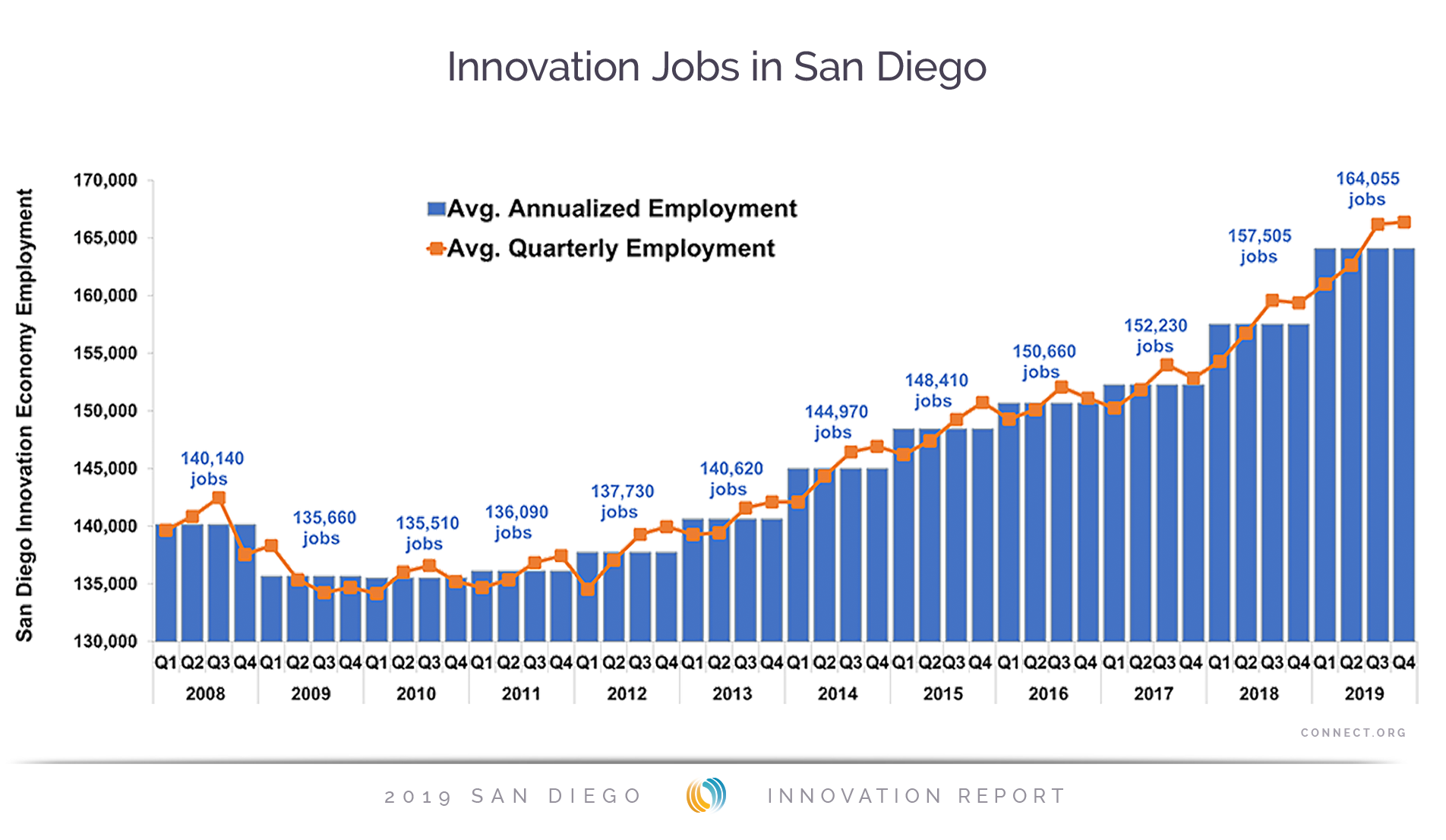 *According to the Quarterly Census of Employment and Wages